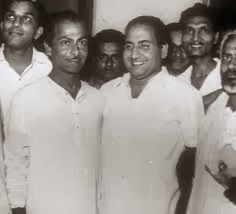 Mohd Rafi had truly been the voice of common man in India. Even today, the suburbs and villages of India wake up with this voice of the soil. It is of no surprise that, in the 50s and 60s, Rafi was mostly used by almost all the music directors in Bombay- Naushad, Madan Mohan, O P Nayyar, Shankar Jaikishen, Ravi, Chitragupta and Roshan- all sworn by Rafi.

The gap perhaps existed with a lot of musicians hailing from the East. No regionalism intended, but it is a surprising fact that Rafi was not the most used male singer by any Bengali Director of that period. From Anil Biswas to Bappi Lahiri, Rafi was never the prime choice. S D Burman, R D Burman, Bappi Lahiri used Kishore more(although, Rafi enjoyed being the prime singer for the Burmans in the 60s), Salil chowdhury used Manna De the most, while Anil Biswas’ favourite remained Talat. Hemant Kumar recorded 30 odd songs with him, but again, his maximum memorable male songs were crooned by him only. And then, there were MDs like Shyamal Mitra, who in spite of composing in around half a dozen Hindi films, carefully overlooked Rafi. Was there a disconnect? Regionalism can be overlooked due to the fact that almost, or for that matter all the Bengali music directors, when it came to female singer selections, had no problem whatsoever with Lata and Asha. Salil and Hemant recorded umpteen Bengali songs with Lata whereas R D Burman and Sudhin Dasgupta did the same with Asha without any problem, when they had home grown talents like Geeta Dutt, Sandhya Mukherjee, Arati Mukherjee and Nirmala Mishra who were great on their own; Sandhya and Geeta especially were considered by many to be as good as Lata.

As a classically trained non-Bengali friend of mine residing in US, who took classical training under Pandit Jasraj and never wants to reveal his identity owing to personal reasons, once told me about the “exclusive” range which Rafi possessed which none before him or after him had. “Starts at the beginning of Mudara Saptak(medium octave) and goes to the extreme end of Tara Saptak(High Octave)- Rafi’s range was quite contrast to the Saigalian school(K L Saigal) of modern Indian singers who had coverage from mid of Udara saptak(Low octave) to the mid of Tara saptak.” Studying Rabindra Sangeet, the specific dose all those Bengali musicians have been brought up with, the example can be made clearer- almost all the Tagore songs are bound within the specified range of Saigalian schhol- of course, Tagore came much earlier than Saigal, but I refer this term for understanding sake.

Rafi had very few low octave exhibitions- of course in his youth, he could touch around 1-2 notes in the lowest octave in “Man tadpat hari darshan” and “Toote hue khwabon ne”. Salil Chowdhury, reportedly had repeated problems with Rafi’s hitting low notes and had a small skirmish during the recording of “Tasveer teri dil mein” when Rafi wanted the scale to be higher to his comfort. All these Bengali music directors were good singers as well, barring perhaps, Salil. The Burmans, especially, were classically trained and possessed supreme vocal skills and had a range more resembling towards the traditional Bengali school. S D Burman, between 1958- 1965, used Rafi the maximum. Looking at his usage of Rafi, vis-à-vis SJ or Naushad, it is not surprising to notice that he used Rafi at a different scale and with “controlled emotions”( barring a few situational requirements like “Yeh duniya agar mil bhi jaye” climax) as compared to Naushad or SJ who wanted him to be higher and higher. It is worth mentioning here that, the notes Rafi touched in tara saptak like in "Zindabad zindabad ae mohabbat zindabad" are unmatched in the industry. He was the King of High notes.

Salil never used Rafi in the 70s all throughout. R D used him, but always like a distant, light-years behind second. SD was worse than his son, in the 70s. Anil Biswas anyhow was out of the gambit long before, even when he was, he carefully opted out of Rafi. Hemanta had only one movie with Rafi in the 70s- Love In Canada- way later in 1979. Shyamal Mitra had none. Basu Manohari had no Hindi releases but a few Bengali modern songs for Puja in 1978. Ironically, Rafi, who seemd to have covered all ranges of music in his 36 years career, never had a Rabindra Sangeet album released. It seems, Shantidev Ghosh- the Tagore erudite- had some Rabindra Sangeet recorded with Rafi, but did not get clearance from stringent Vishwa Bharati those days. A gap in musical school, perhaps…
Posted by Arghya at 21:43